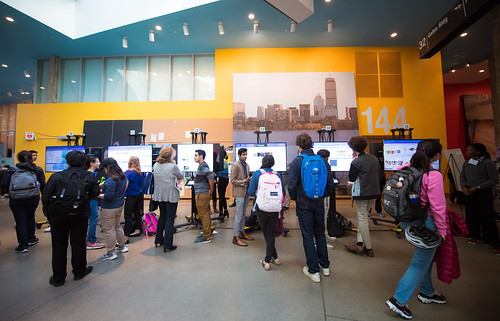 A walk through the spring poster sessions of the 2018-2019 Advanced Undergraduate Research Opportunities Program (better known as SuperUROP) in the Stata Center offered a glimpse into the curiosity, creativity, and technical know-how of nearly 130 MIT undergraduates.

The SuperUROP Showcase featured projects that could provide the world with new options for renewable energy or help children illustrate stories they imagine. Software ranged from tools that would translate sign language from moving hands to programs that could detect gerrymandering and generate nonpartisan district voting maps. Other projects looked at ways to aggregate data from the internet without violating privacy and how to engineer plants to glow in the dark as an alternative light source.

In the two high-energy sessions on April 25, students described how their yearlong projects — all supervised by faculty members or researchers — would actually work. With formulas, graphs, charts, maps, photos, and text projected on electronic posters, the presenters held lively conversations with fellow students, professors, and visitors all afternoon. The showcase was immediately followed by Masterworks, a similar session representing master’s-thesis research conducted by current EECS students and recent graduates — nearly half of whom were SuperUROP scholars as undergraduates.

As he does every year, Charles E. Leiserson, Edwin Sibley Webster Professor of Computer Science and Engineering, strolled through the showcase, viewing one presentation after another. “You go around and feel the energy and the brilliance of our students,” said Leiserson, who has supervised several SuperUROP scholars over the years. “I think it’s pretty diverse collection of posters.”

Among the first undergraduates to take her station was EECS senior Sydney Gibson, who was more than happy to talk about her research project titled “Validating a New Method for Formally Verifying Go Programs,” something that would be simpler and easier for the typical developer to use.

“It’s nice to figure out how to communicate the work that I have done to an unfamiliar audience, but it’s definitely a challenge that feels somewhat orthogonal to the actual research I’m doing,” Gibson said. “But overall, it’s enjoyable.”

Unlike traditional one-term UROPs, SuperUROP projects span the entire academic year and include a two-term class on conducting and presenting research, including writing journal-style papers and learning to explain or “pitch” research in a condensed format. When launched in 2012, SuperUROP was open only to EECS students, but the program was later expanded to include other students from throughout the School of Engineering and beyond. For the second year, thanks to a generous contribution from an anonymous donor, SuperUROP was also open to students conducting projects combining computer science and the humanities, arts, or social sciences.

Haripriya Mehta’s personal love of writing fiction writing helped guide the EECS junior to her SuperUROP project titled “Paper Dreams: Deep Learning Story Board Interface.” Paper Dreams is a creative storytelling application, responsive to both voice and sketches, even those rendered by children. Draw a dinosaur and the software recognizes it’s a dinosaur. Write “Zoo in a City” and the program will generate an illustration.  “It’s like a bedtime story but children are creating their own story,” Mehta said. Adults may find it useful as well, she noted.

Several students focused on energy issues, including Wenyu Ma, a senior in mechanical engineering. Her passion for renewal energy and her interest in modeling drove her to examine the impact of renewable energy generation on natural gas infrastructure. This would predict the price of natural gas, used to fill in gaps from wind and solar power that are volatile due to changing patterns.

Jesse J. Hinricher, a senior in chemical engineering, tackled the one of the most vexing solar-energy issues: how to store daytime energy for use at night. “The goal of my project is to enable renewal energy generation by reducing the cost of grid-scale energy storage,” he explained in an expertly worded “pitch.” For his project, “Exploration of Alkaline Permanganate-Polysulfide Aqueous Redox Flow Batteries for Low-Cost Energy Storage,” he examined low-cost alternatives to the expensive material currently used in batteries, which could make solar energy more cost-efficient.

Naomi S. Bright, also a ChemE senior, examined how the lipids in micro algae could be more efficiently produced for diesel fuel. “The cool thing about my project (“Optimization of Micro Algae for Lipid Production”) is that it combined different things I’m interested in: energy and biological work,” she said.

EECS senior Fernando Andre Ortiz-Soto’s SuperUROP project could have been ripped from the political headlines: “An Optimization-Based Approach to Districting and Gerrymandering.” He explained the project this way: “Right now, the way districting plans are made is very opaque — not at all transparent,” he said. “What I give users the ability to do is make a simple equation or function that takes on a certain value for a map.” Scoring to that map metric would prevent lawsuit-generating “monstrosities” such as the district maps for North Carolina and Florida, which Ortiz-Soto gleefully pointed to on his poster. His program would create more compact, contiguous voting districts. He hopes policy makers will take note.

While EECS junior Collin Potts doesn’t like public speaking, he admitted that he enjoys the conversations he was having about his project “Generating Language from Wikipedia for Question Answering.” He fielded numerous questions:  “What motivates this model you’re using?” “Why did you make these decisions?” “How did that improve things?”

He found the inquiries useful. “When you care about your project you like thinking about it and then people come up and ask questions and you’re like, ‘Oh man, I haven’t thought about that,’” he said. “That’s a different way of looking at a problem.”

Students praised SuperUROP for expanding their horizons on subjects they might not otherwise explore and giving them increased responsibility. “It’s been a good experience; you get good feedback from your [teaching assistant],” said EECS senior Endrias Kahssay, who examined the challenge of increasing memory while maintain performance in his project on “Optimizing Cilksan.”

For her last undergraduate year, ChemE senior Sarah Coleman “wanted to do something really cool and that would scare me a bit.” She got the chance with her project, “Increasing Afterglow Time of the Light-Emitting Plant,” where she worked with nano material for the first time. The project goal is to engineer plants that could glow in the dark. Picture a room lit by houseplants. “We are pretty far from that,” Coleman admitted. “But it would be kind of cool.”

During SuperUROP, students learn another key skill: condensing their research into a poster. “A poster is always challenging because you have limited real estate to show all that you are doing,” Mehta said.

Such experiences underscore the value of the program’s high-level approach, faculty and administrators say. “SuperUROP provides a real-world research experience for our undergraduates,” noted Anantha Chandrakasan, dean of the School of Engineering and Vannevar Bush Professor of Electrical Engineering and Computer Science, who launched SuperUROP when he was EECS department head in 2012. “It’s always impressive to see how much they accomplish in a relatively short time, and to see them learn skills that they'll continue to use in their future studies and careers."

Over the past seven years, hundreds of undergraduates have engaged in graduate-level research thanks to SuperUROP, said current EECS department head Asu Ozdaglar, School of Engineering Distinguished Professor of Engineering. “It’s been exciting to see them engage in their projects and then take what they’ve learned with them into graduate school, start-ups, or jobs in industry,” she said.

More than 20 students’ presentations earned awards this year. Students picked up their certificates for completing SuperUROP at a celebration a few weeks after the showcase.

After two SuperUROP afternoon sessions, nearly 40 graduate students participated the 2019 EECS Masterworks 2019 session, discussing research that ranged from designs for a terahertz chip-scale molecular clock, to advanced robotics and implantable devices. (This related content includes a slideshow of Masterworks highlights and a list of participants who won prizes for their posters).

Many Masterworks participants had participated in SuperUROP as undergraduates – and considered valuable training. “SuperUROP allowed me to get some experience in the amount of rigor that’s required by this research,” said Zareen Choudhury, a graduate student in the Computer Science and Artificial Intelligence Laboratory (CSAIL), who was presenting her poster on Internet of Things  tracking devices.  “Even if you’re doing a normal UROP, you don’t end up spending as much time on it. You’re not able to invest yourself and dive as deeply. So SuperUROP gave me a bit of a step up.”

Visit YouTube to view a short video montage from the event, followed by 12 brief videos of 2018-2019 SuperUROP scholars presenting their research results.